LSA’s toy drive and one of our dedicated family advocates are profiled in NYC’s Spanish-language newspaper. 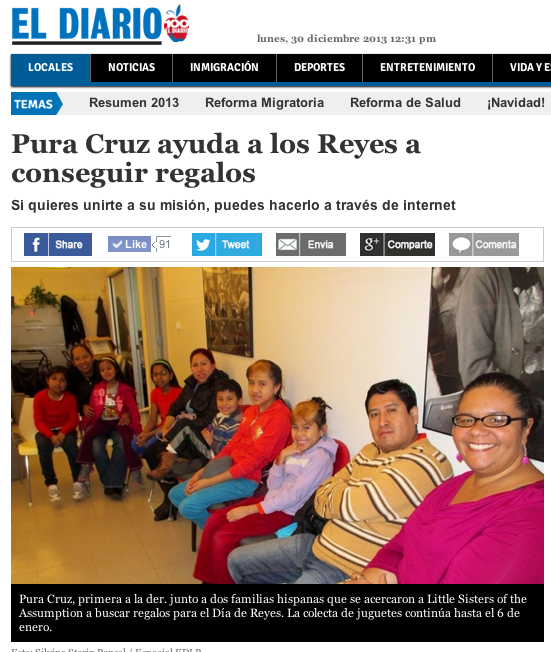 Pura Cruz Helps the 3 Kings Bring Gifts for the Epiphany

By Silvina Sterin Pensel
(Dec. 29, 2013) Pura Cruz, a New Yorker of Dominican heritage with a fresh smile and the energy of an endless battery, constantly goes back and forth across the building of the Little Sisters of the Assumption Family Health Service, a non-profit organization with roots in El Barrio since 1958.

Pura does not have just one defined role, she helps with everyone and everything: She works in the Food Pantry, arranges for home visits by nurses to children with asthma, and makes sure that school children in need of tutoring get the specific help they need. But this holiday season, like every year, Pura is hard to find. “Where is Pura?” asks a desk neighbor. “Where would you think she would be? In the little room filled with gifts, of course!” replies another colleague.

That’s because from Thanksgiving through the second week of January, that tiny enclosure filled with brand-new toys, coats and pajamas is her lair. “I pretty much live here until January 6th during LSA’s Toy Drive ” explains Pura while looking among the packages for a toy that would be appropriate for a 3-year-old and something cool-worthy for a 15-year-old adolescent. “I put a lot of thought into choosing because we don’t want kids receiving just any gift.” She adds, “If a child is at an age where they can read books, you can’t give them a picture book, and a toddler won’t know how to operate a remote control car.”

Despite the presence of trendy cafes and little stores in the area, East Harlem remains one of the poorest areas of Manhattan, where even working families, with multiple children, struggle to survive on just $250 or $300 a week. The holiday season is synonymous with tension and stress, and the smallest in the household can sense it. “Kids are kids, but they are not fools,” said Pura, “and they understand that when they see worried, anxious parents there is financial hardship. We try to bring some joy back into their daily lives, and even more so during the holidays.”

Until this year, the toy drive had relied almost exclusively on caring people who personally approached Little Sisters to donate toys, but a new virtual component was added this year to reach more donors and make the process of donating easier. “We made a wish list of toys on Amazon that can be purchased by clicking on toys and sending them directly here – it’s simple. That way those who still need to fill their children’s shoes, as is tradition for Three Kings Day, but don’t have enough to buy toys, can come here to get some.”

Candida, a young mother from Guerrero, Mexico, is one of them. At 28, with three young daughters, life is difficult. For Gisse, age 5, Pura pulls a wooden puzzle of the alphabet of a bag prepared for the family, and for the older girls, books from the Ivi and Bean series.

Soon Damaso, originally from Puebla but who now cooks in a NYC restaurant, and his wife, Maria, arrive accompanied by their three children, Ceasar, Elizabeth and Marixza. Pura has also prepared bags for them. The conversation flows between the families, and it becomes clear they have known each other for a while. Candida says she completed her primary school education here at last, and is very grateful for the certification she received from Little Sisters, which enabled her to get a Mexican passport. Her husband works delivering dry cleaning, so their schedules don’t allow them to go to Little Sisters together very often. “But,” says Damaso, “each of us comes every time we can, like today, I come to help or take an English class.”

“It’s very important to us that we build relationships,” said Pura, who has worked at LSA for a decade and witnessed the struggles of many of these families. “We see families suffer greatly as they work to get ahead, so this little window, this little moment of bliss when they receive gifts is, to me, the best present we can give.”

PHOTO: Pura Cruz, right, with two Hispanic families who came to Little Sisters of the Assumption
Family Health Service to find gifts for the Epiphany. The toy drive continues until January 6th.