LSA Family Health Service is pleased to announce it has received an award from the NYC Complete Count Fund — a partnership between CUNY, Mayor Bill de Blasio and the New York City Council. The NYC Complete Count Fund is a first-of-its-kind Census-related community organizing program that will support and resource community-based organizations to help NYC reach a full and accurate count in the 2020 Census.

The Complete Count Fund was built with the understanding that local community-based organizations — which serve New Yorkers in the communities where they live and in the languages that they speak — are the most trusted messengers of important and sensitive information. 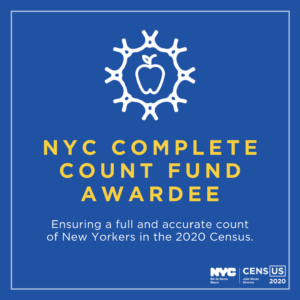 LSA is proud to join this coordinated citywide effort to build awareness about the census, convey its importance, fight the spread of mis- and disinformation, and help bridge the digital divide that might prevent many New Yorkers from participating in next year’s first online census.

At LSA we believe that every person regardless of country of origin, religion, or ethnicity deserves to be counted.  Through the Complete Count Fund, LSA will educate and inform the East Harlem community about the importance of being counted and try to dispel any fear and misinformation to ensure that every New Yorker is counted.

A complete and accurate count is critical to the future of New York City. The census will determine how more than $650 billion in federal funds for public education, public housing, roads and bridges, and more, gets distributed annually throughout the country. It will also determine the number of seats each state is allocated in the House of Representatives (and thus, the Electoral College). Based on current estimates, an undercount could cost the State of New York up to two congressional seats.

In such a complex city, enriched by such linguistic and cultural diversity, New York City’s full participation in the first online census faces a unique set of challenges. As New Yorkers, we have embraced these challenges as an opportunity. Together, these citywide efforts will lay the groundwork for a civic engagement apparatus that will continue well beyond the 2020 census.

The Complete Count Fund will launch in early January with an all-day kick-off event and training.

LSA Family Health Service, founded by the Little Sisters of the Assumption, strengthens and empowers vulnerable families and children by meeting their basic needs for food, healthcare, education and a safe home, in the belief that affirming families in their own dignity improves the entire community.  Learn more at www.littlesistersfamily.org

About NYC Census 2020
NYC Census 2020 was established as a first-of-its-kind organizing initiative by Mayor de Blasio to ensure a complete and accurate count of all New Yorkers in the 2020 Census. The program is built on four pillars: (1) a community-based awards program, The New York City Complete Count Fund; (2) an in-house “Get Out the Count” field campaign; (3) an innovative, multi-lingual, tailored messaging and marketing; as well as (4) an in-depth Agency and Partnerships engagement plan that seeks to leverage the power of the City’s 350,000-strong workforce and the city’s major institutions, including libraries, hospitals, faith-based, cultural institutions, and higher educational institutions, and more, to communicate with New Yorkers about the critical importance of census participation.