A New York Post story on Catholic charities and fundraising in context of Pope Francis’ US tour includes a quote from Reada Edelstein, LSA Family Health Services’ Director of Development and Communications. 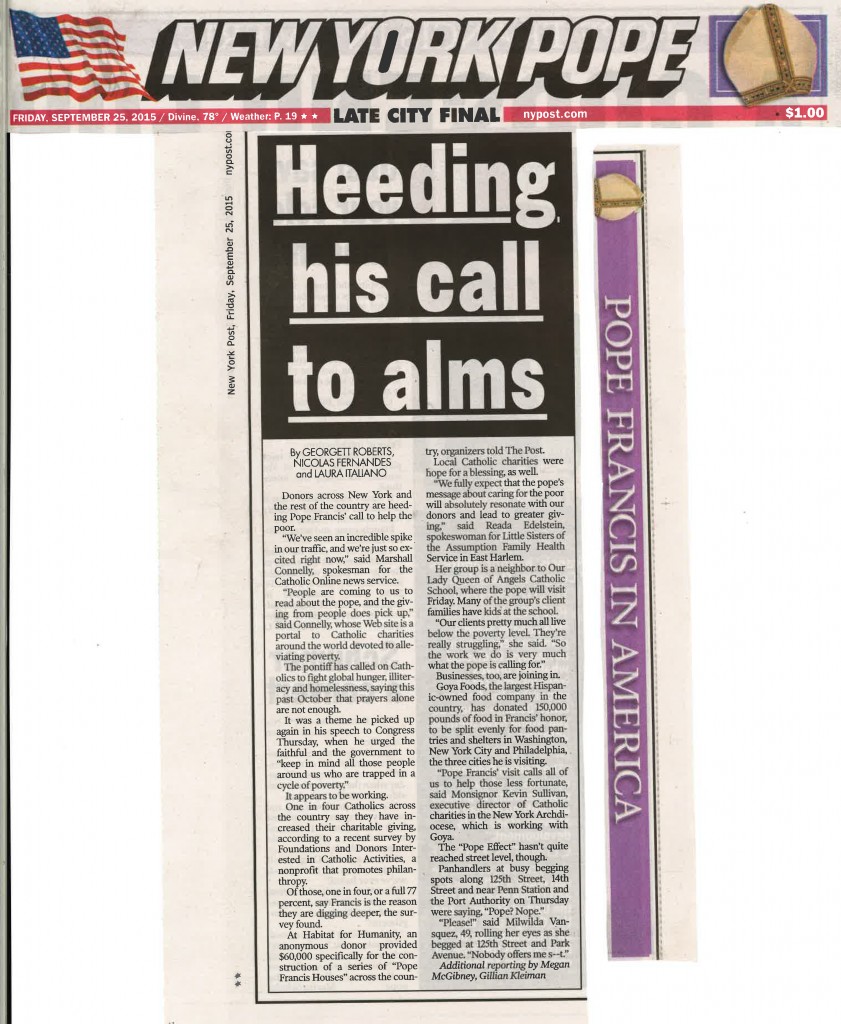 Heeding his call to alms

Published online as: Pope Francis’ visit to America has been a God-send for charities
By Georgett Roberts, Nicolas Fernandes and Laura Italiano

Donors across New York and the rest of the country are heeding Pope Francis’ call to help the poor.

“People are coming to us to read about the pope, and the giving from people does pick up,” said Connelly, whose Web site is a portal to Catholic charities around the world devoted to alleviating poverty.

The pontiff has called on Catholics to fight global hunger, illiteracy and homelessness, saying this past October that prayers alone are not enough.

It was a theme he picked up again in his speech to Congress Thursday, when he urged the faithful and the government to “keep in mind all those people around us who are trapped in a cycle of poverty.”

It appears to be working.

One in four Catholics across the country say they have increased their charitable giving, according to a recent survey by Foundations and Donors Interested in Catholic Activities, a nonprofit that promotes philanthropy.

Of those, one in four, or a full 77 percent, say Francis is the reason they are digging deeper, the survey found.

At Habitat for Humanity, an anonymous donor provided $60,000 specifically for the construction of a series of “Pope Francis Houses” across the country, organizers told The Post.

Local Catholic charities were hope for a blessing, as well.

“We fully expect that the pope’s message about caring for the poor will absolutely resonate with our donors and lead to greater giving,” said Reada Edelstein, spokeswoman for Little Sisters of the Assumption Family Health Service in East Harlem.

Her group is a neighbor to Our Lady Queen of Angels Catholic School, where the pope will visit Friday. Many of the group’s client families have kids at the school.

“Our clients pretty much all live below the poverty level. They’re really struggling,” she said. “So the work we do is very much what the pope is calling for.”
Businesses, too, are joining in.

Goya Foods, the largest Hispanic-owned food company in the country, has donated 150,000 pounds of food in Francis’ honor, to be split evenly for food pantries and shelters in Washington, New York City and Philadelphia, the three cities he is visiting.

“Pope Francis’ visit calls all of us to help those less fortunate, said Monsignor Kevin Sullivan, executive director of Catholic charities in the New York Archdiocese, which is working with Goya.

The “Pope Effect” hasn’t quite reached street level, though.

Panhandlers at busy begging spots along 125th Street, 14th Street and near Penn Station and the Port Authority on Thursday were saying, “Pope? Nope.”

“Please!” said Milwilda Vansquez, 49, rolling her eyes as she begged at 125th Street and Park Avenue. “Nobody offers me s- -t.”

Read the story online at NYPost.com