Our Board Chair, Scott DePetris, spoke with Markets Media about the inspiration and drive behind his work with LSA. 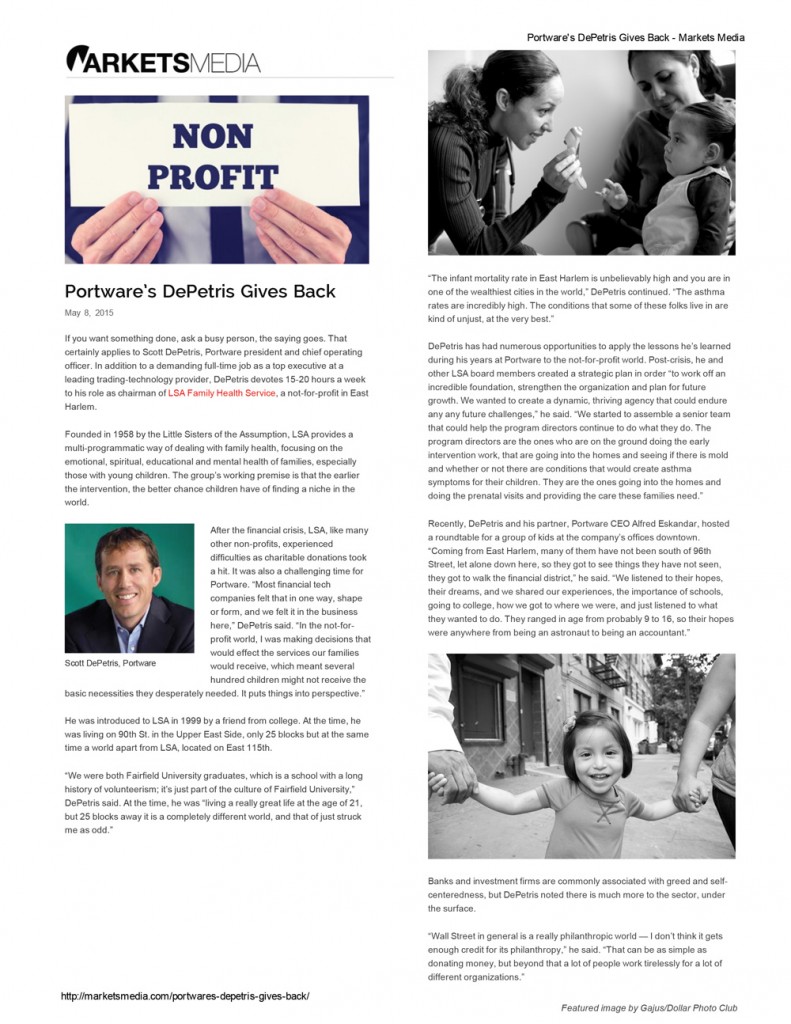 If you want something done, ask a busy person, the saying goes. That certainly applies to Scott DePetris, Portware president and chief operating officer. In addition to a demanding full-time job as a top executive at a leading trading-technology provider, DePetris devotes 15-20 hours a week to his role as chairman of LSA Family Health Service, a not-for-profit in East Harlem.

Founded in 1958 by the Little Sisters of the Assumption, LSA provides a multi-programmatic way of dealing with family health, focusing on the emotional, spiritual, educational and mental health of families, especially those with young children. The group’s working premise is that the earlier the intervention, the better chance children have of finding a niche in the world.

After the financial crisis, LSA, like many other non-profits, experienced difficulties as charitable donations took a hit. It was also a challenging time for Portware. “Most financial tech companies felt that in one way, shape or form, and we felt it in the business here,” DePetris said. “In the not-for-profit world, I was making decisions that would effect the services our families would receive, which meant several hundred children might not receive the basic necessities they desperately needed. It puts things into perspective.”

He was introduced to LSA in 1999 by a friend from college. At the time, he was living on 90th St. in the Upper East Side, only 25 blocks but at the same time a world apart from LSA, located on East 115th.

“We were both Fairfield University graduates, which is a school with a long history of volunteerism; it’s just part of the culture of Fairfield University,” DePetris said. At the time, he was “living a really great life at the age of 21, but 25 blocks away it is a completely different world, and that just struck me as odd.”

“The infant mortality rate in East Harlem is unbelievably high and you are in one of the wealthiest cities in the world,” DePetris continued. “The asthma rates are incredibly high. The conditions that some of these folks live in are kind of unjust, at the very best.”

DePetris has had numerous opportunities to apply the lessons he’s learned during his years at Portware to the not-for-profit world. Post-crisis, he and other LSA board members created a strategic plan in order “to work off an incredible foundation, strengthen the organization and plan for future growth. We wanted to create a dynamic, thriving agency that could endure any future challenges,” he said. “We started to assemble a senior team that could help the program directors continue to do what they do. The program directors are the ones who are on the ground doing the early intervention work, that are going into the homes and seeing if there is mold and whether or not there are conditions that would create asthma symptoms for their children. They are the ones going into the homes and doing the prenatal visits and providing the care these families need.”

Recently, DePetris and his partner, Portware CEO Alfred Eskandar, hosted a roundtable for a group of kids at the company’s offices downtown. “Coming from East Harlem, many of them have not been south of 96th Street, let alone down here, so they got to see things they have not seen, they got to walk the financial district,” he said. “We listened to their hopes, their dreams, and we shared our experiences, the importance of schools, going to college, how we got to where we were, and just listened to what they wanted to do. They ranged in age from probably 9 to 16, so their hopes were anywhere from being an astronaut to being an accountant.”

Banks and investment firms are commonly associated with greed and self-centeredness, but DePetris noted there is much more to the sector, under the surface.

“Wall Street in general is a really philanthropic world — I don’t think it gets enough credit for its philanthropy,” he said. “That can be as simple as donating money, but beyond that a lot of people work tirelessly for a lot of different organizations.”