Lucia Russett, LSA Director of Advocacy, spoke about the importance of DACA and ID’s for NYC residents. One of the things on Mayor Bill de Blasio’s agenda is the creation of municipal ID cards for the city’s undocumented residents, and although no details have been released, immigrant advocates say that there is a program already in practice that could help the effort get going. NY1’s Tara Lynn Wagner filed the following report 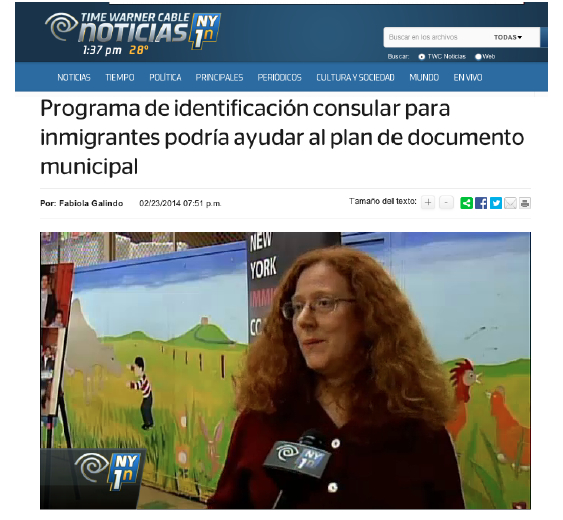 “In schools, they always ask for ID, and if you don’t have it, you cannot go in because they get suspicious,” Flores said.

Today, Victoria has what officials call a key to the city. She has a consular ID, a document which opens doors that undocumented immigrants otherwise find unwelcoming.

“People did not have photo IDs, so because of that, they were not able to get into schools, they couldn’t open bank accounts,” said Steven Choi, executive director of the New York Immigration Coalition. “Really preventing them from being full participants in the city.”

“This is an important step on the way to getting Municipal IDs – a type of identification that could be accessible to everyone in New York City–similar to what we see in New Haven, Connecticut, where they offer identification for all residents of the city. But until that happens, it’s very important for people to carry with them every day something that includes their photos and essential personal information,” said Lucia Russett, Director of Advocacy at Little Sisters of the Assumption Family Health Service.

“To be able to walk the streets and feel like they have identity is impactful. It’s beyond words,” said Ivan Luevanos, chief of staff for City Councilman Carlos Menchaca.

Immigrants looking to apply for for consular IDs gathered at P.S. 155 in East Harlem Sunday for the New York Immigration Coalition’s 22nd Key to the City initiative, an event that brings together representatives from half a dozen consulates as well as city and community services.

Since 2011, the group has helped distribute nearly 11,000 consular IDs and foreign passports, and they say this is just the beginning.

“With the new administration, it’s an amazing opportunity to build on this initiative and show this is a model by which all of the different folks can come together for something that’s so critically needed for our community,” Choi said.

He’s talking about municipal IDs, an idea supported by Mayor Bill de Blasio and one that Mexican officials say will bring big changes to immigrants from all countries.

“This is going to be a new era for the Mexicans and for the Hispanic people living in New York,” said Mexican Consular Mario Cuevas.

“That will allow them access all city services and continue to imbue them with that power to know that they are a human being and that they can stand in any school, can stand in any library and be treated with same respect that all other New Yorkers deserve,” Luevanos said.

Mayor Bill de Blasio mentioned the municipal ID cards during his recent State of the City address. Although few details are available, Steven Choi of the coalition believes that the consular ids will serve as a perfect stepping stone.

He and other officials gathered Sunday said that they look forward to working with the mayor’s office on developing a proposal and getting it passed.